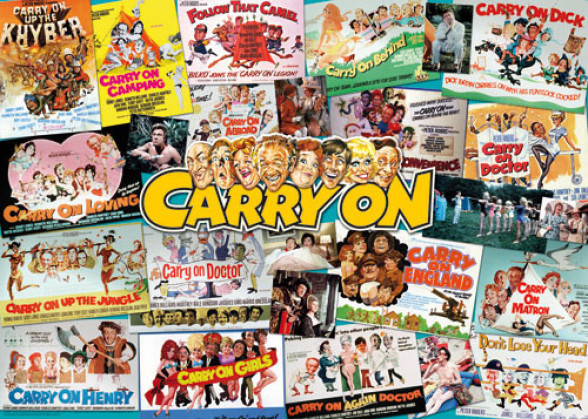 The Carry On films are such a staple of British cinema - is there anyone who has never seen one? - that it is surprising to realise that, until relatively recently, they were rarely analysed in any meaningful manner. My own relationship with them has gone through a number of changes and shifts over the years, but I have come to the conclusion in general that it is counter-productive to talk of CO films as a monolithic block, which ignores the variety of styles and narratives they deploy.

I have mentioned elsewhere on this site that I attended a very interesting course on post-war British cinema at the UEA in Norwich a few years ago, and as the course was part of a wider certificate for those who wanted it, we were all required to write an essay from a list of possible titles. I chose to compare Carry On films with Ealing comedies, and as part of my research I drew up a list of CO films, looking at common themes. Here is the list I drew up:

My main contribution I suppose - I'd like to think it was reasonably original, but no doubt somebody said it before me, somewhere - was that there were 'sets' of Carry Ons. The series starts with what I have called 'profession' films; films that look at groups of people in the same job or institution - police, army, teaching etc. They then start to get mixed up, but the next set that features prominently is 'spoof' films, looking at current or traditional cultural themes such as spying (obvious reference to James Bond), horror (particularly Hammer films), westerns and so forth. The third main batch of films then looks at more general 'groups', people thrown together in a situation. These include films such as Camping, Abroad, and Behind; almost all the group films come during the series' decline in the late 60s/early 70s. 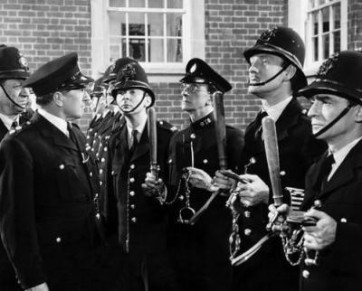 The first four films look at the army, the police, hospitals and schools; after Regardless, which doesn't really fit into any pattern (I have referred to it as a series of 'linked episodes', but it could also be regarded as the first 'group' film) there is really only one other profession film - Cabby - before the series moves on into other areas, only returning to profession films with the hospital ones, Doctor, Again Doctor (a dead giveaway that the series was running out of steam) and Matron.

Almost all these films centred on a story arc involving a group trying to get through training, or trying to retain the status quo, in naturally circular scenarios (the next group of recruits etc). The first film, Sergeant, had the recruits deciding to help the Sgt (played by William Hartnell, who of course went on to play the first Doctor Who) win the best platoon award before retirement, and in Teaching the story arc is the possible departure of the headmaster, played by Ted Ray (in his only CO film).  The early films usually featured a roster of light comedy players, such as Bob Monkhouse or Leslie Phillips, along with those we would now consider to be CO regulars, and their style was very much in tune with other British comedy films of the 50s such as Dentist on the Job; this scene from Carry On Teacher is quite typical of the light, pratfall style of comedy then prevalent: 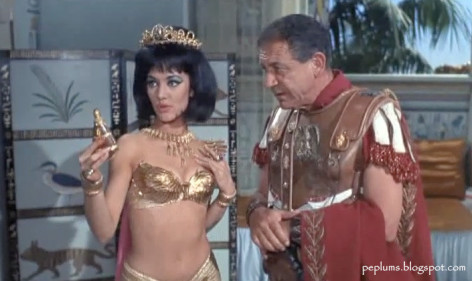 Cleo and Marc Antony have trouble with asps

There are four 'spoof' films in a row, starting with Spying, followed by Cleo, Cowboy and Screaming (my own favourite). with Follow that Camel and Up the Khyber following (although the clumsy titles are clues that they were not originally intended to be part of the CO series). The real link with these films, which I think are easily the best of the COs, is not, as one might expect, Kenneth Williams, Sid James or even Charles Hawtrey (and certainly not Barbara Windsor) but the unsung Jim Dale. Dale appears in almost all the best COs, starting with Cabby and then in an unbroken sequence in the 60s until Doctor. Unfortunately he missed out on Up the Khyber (I wonder why?) and ended with Again Doctor. 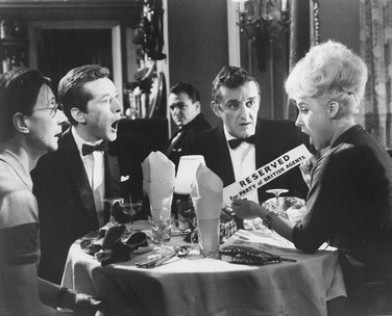 There is no link between the spoof films and the cast etc that I can see, other than Jim Dale, to explain why I think they are the best of the COs; Sid James is in two of them but not Screaming or Spying, Kenneth Williams is ever-present but is also in lots of other inferior COs, and so forth. One big bonus for me in Screaming is the presence (in his only CO film) of Harry H Corbett.  Back in the late 1980s I shared a flat with a Polish woman, and one morning I casually mentioned that I had watched a Carry On film the previous evening, whereupon she asked 'What's a Carry On film?'   Ths is actually quite a difficult question to answer, but I remember that I described the following scene as a typical example of CO wit:

Cowboy was the first of the very few CO films to feature a title song, but it is often forgotten now in preference to films such as Cleo, Screaming and Khyber, but it gave Jim Dale a central role as Marshall P Knutt, a sanitary engineer whose first name leads to a mix up and he gets sent out to Stodge City (the COs were never too worried about their painful puns!) to 'clean up' the town, which needs it as The Rumpo Kid (Sid James) has taken over the town.  Luckily for Marshall, Annie Oakley (Angela Douglas) is on the stagecoach with him, having come to seek revenge on The Rumpo Kid for killing her father, the previous Sheriff (memorably played by Jon Pertwee, in the second of his three cameo appearances in the 60s Carry Ons).  It is of course Annie who has saved the stagecoach from Indians just outside town, but she is happy for the hapless drainage man to take the credit, as he makes a dramatic entrance in town: 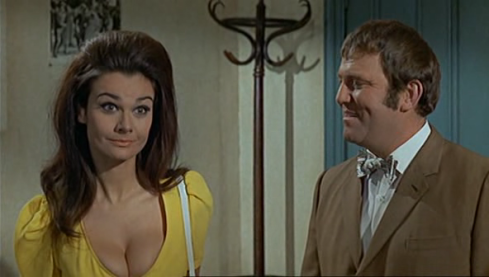 I associate most of the 'group' films with the series' decline, from about the time of Again Doctor and Camping in 1969. The end of the spoof films meant that something was lost, and this was simply replaced with cheap smut and tedious, infantile gags. I'm quite happy with infantile humour sometimes, but it needs to be delivered with some panache by quality comedians, and overall the likes of Charles Hawtrey and Jim Dale were being replaced by Jack Douglas and Windsor Davies and it was all getting very threadbare and shabby.  After Convenience (discussed below), which was I believe the first Carry On box failure (possibly as it took a few potshots at striking workers, forgetting that their core audience was largely made up of the same working class) the team looked at then-current themes and issues, such as Brits travelling abroad or the 'sexual revolution', though they were never satirical in nature.  Busty actresses like Imogen Hassall (Loving, above) and Margaret Nolan (Henry, Matron, Girls, Dick etc) found themselves in demand, along with starlets such as Carol Hakwins and Sally Geeson, who feature in this clip from Abroad (Hawtrey's last appearance in a CO film).

Ironically, it was the increase in bawdy humour, and the more sexualised nature of the CO films, that hastened their decline; the more permissive climate in the 1970s meant that the COs were competing with soft porn series like Confessions of...series, the Adventures of... series, and one offs like Can you keep it up for a week?, and if you wanted tits and bums why bother with the COs?  In a bid to win this audience back, the Carry Ons pushed the boundaries further, which led to embarassingly unfunny end-of-the-pier rubbish like England and Emanuelle, for which one can only assume that someone held a gun to Kenneth Williams' head to make him sign on the dotted line. 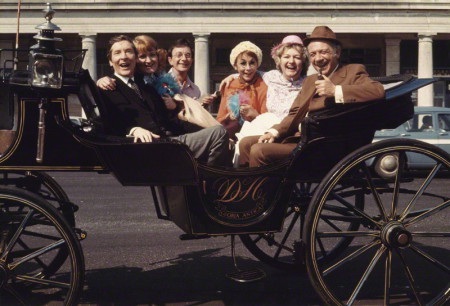 One film I do like though is At Your Convenience; many years ago I went to an all-night showing of Carry On films at The Scala cinema in King's Cross, sadly no more. We all arrived after closing time, somewhat the worse for wear, having missed the first film. The second one was Screaming (the whole audience mimicking the squeals of baby Oddbod) and then it was At Your Convenience. I've always liked the vignettes of home life with Sid James (in 'Bless this House' mode) and Hattie Jacques - and of course Joey the horse winner-predicting budgie - in this film as seen in this compilation of scenes:

Here is one unimpressed critic's view of the films:

"The script is utterly banal.  It is incredible that human minds can put such muck on to paper"  (31 Jan 1974)

"...so bad in places...truly chronic dialogue...dreadful acting.  Sid James had never been quite so bad as this.  A collection of such rubbish you're amazed it could ever have been stuck together.  Only an audience of illiterates could ever have found this tripe amusing."  (19 Jan 1988) 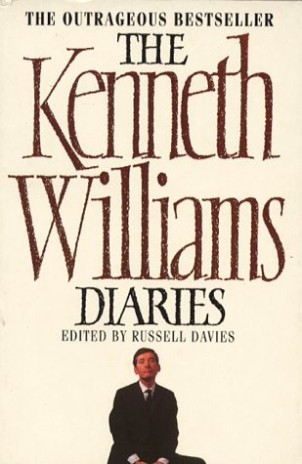 The punchline, of course, as I'm sure many of you already knew, is that the writer of the acerbic comments above is Kenneth Williams, in his diaries.  This is one of the saddest books I've ever read, as Williams generally loathed what he did and yet couldn't tear himself away from the Carry Ons.  Indeed, he went on longer than almost anyone, appearing in the 'final' CO, Emmannuelle  - I've not seen Columbus and don't really regard it as part of the series to be honest  - and notching up more appearances than anyone else (25, if anyone's counting, beating Joan Sims' 24, Charles Hawtrey's 23 and Sid James' 19).

Of course, in the diaries, Williams often contradicts his own damning judgements of the CO canon; on 04 Jan 1979 he wrote of Henry: "...amazing how well this was made!  Everyone in it was competent and the sheer look of the thing was very professional" which is a rather different verdict to the ones he gives above. 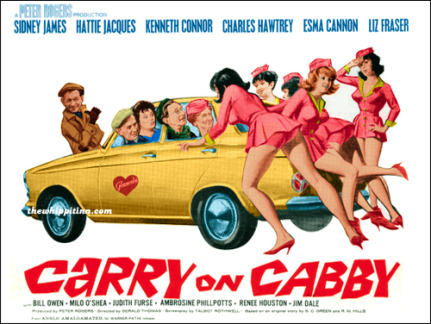 For the first 7-8 years or so of their life, the Carry Ons were a very welcome part of the furniture, but as part of a traditon of comedy films which has long since departed.  What I do find interesting now is that Rogers and Thomas made a number of other comedy films at the time, one of which, The Big Job, I've just written about in the 'Unsung films' section of the website.  It's reasonably common knowledge that three of the COs were not originally intended to be part of the franchise.  Cabby was originally going to be called Call Me a Cab (which is why it's the last line in the film) and Don't Lose Your Head and Follow that Camel were originally released with those titles, before they came under the CO series a couple of years later, hence their rather clumsy titles.

At their best (for me, Cleo, Screaming, Regardless, Cabby, Cowboy, Spying, Khyber, Doctor, Jack and maybe Convenience) the COs were a part of my growing up, a great introduction to some very talented comic actors, and provide some wonderful memories.

There are different DVD box sets of all the Carry On films, which sell now for about £30 or so, or roughly £1 a film, whilst there are numerous books on the series, although one I've always liked, which I think I got at a boot sale many years ago, is 'What a Carry On' (above), which although a 'coffee table' book details all the films and the main actors.