Vic and Bob's affectionate guying of Slade is perhaps the starting point for most people's view of the band, and maybe it is therefore taken for granted that Slade in Flame is going to be a kind of feature-length version of the 'Slade in Residence' sketches, even assuming that people have heard of it, although that situation has started to change over the last few years as Mark Kermode and others have started to promote the film and its virtues; perhaps it has just suffered from being piegeonholed into the 'band make promo film, ony for Slade fans really' idea.

Much of the current growing popularity can be contributed to Mark Kermode after he showed it on his Film Club uncut slot a few years ago.  Kermode has famously described is as 'the Citizen Kane of pop films' and although often those sort of accolades don't do the films any favours, in this case the good Doctor is quite right.

This is NOT a film that promotes Slade as a band; it is a genuine attempt (which is completely successful) at a realist film looking at the rise of a pop/rock band.  Some of the viewers describe the film as closer to Kes than to This is Spinal Tap, and it needs to be made clear that this is in no way a spoof or a comedy.

The films opens with Barry (Dave Hill), Paul (Jim Lea) and drummer Charlie (Don Powell) playing at a wedding with Alan Lake (Jack Daniels) crooning horrendously.  We then get one of Slade's best tracks, 'How does it feel?', over the opening credits:

As they eke out a living of sorts playing dives and drab clubs in the Midlands, they encounter The Undertakers, featuring front man Stoker (Noddy Holder) playing on the same bill as them. The two bands are old adversaries, and there is a serious altercation between them, but at the end of it all, the three decide that they need to ditch their no-hoper lead singer and bring in the raucous Stoker. From there on in Slade are Flame, as they (try to) enjoy the ride leading to fame and fortune.

Their manager, Ron Harding, is played by Johnny Shannon, he of a thousand 'wheeler-dealer' roles in films such as Performance and every episode of The Sweeney you've ever seen, but the corporate boys, in the shape of Tony (Kenneth Colley) and Robert Seymour (Tom Conti), soon move in once they smell money and start to 'package' the boys. In this scene the band first meet Seymour, and find out what Tony means by 'making them stand out a little', as they get booked to appear on pirate radio station Radio City, somewhere out on the Essex Estuary, with a little publicity stunt arranged to keep things lively:

I found this on wikipedia, and I think it's worth quoting in full as it provides an interesting background to the film and how it came about.

"In an August 1997 issue of NME magazine, Holder recalled Slade in Flame:

The first idea really came from our manager Chas Chandler. At the time we'd had a string of number ones and he thought the next best step in our career would be to do a film. We didn't want to do a Hard Day's Night sort of slapstick, speeded-up film, runaround type thing, because we thought that would be a bit too obvious for Slade. The first idea that we had came from Chas' right-hand man, John Steele, who used to be the drummer in The Animals. He came up with an idea called Quite a Mess, which was a kind of comedy spoof on The Quatermass Experiment. It was quite funny, but Dave Hill vetoed that one because he was killed by the Triffid thing in the first fifteen minutes. Then we decided to do a sort of behind-the-scenes, nitty-gritty look at the rock 'n' roll business. The guy who wrote the script, Andrew Birkin, and the director, Richard Loncraine, sent us a first draft of the script, but we didn't feel really that it rang true. So we took the two of them to America with us for six weeks to show them what it was really like on the road, and travelling between gigs we told them stories about what had happened to us and to other bands. They put all of that into a melting pot and came up with what eventually became the storyline for Flame. I haven't seen it for about six or seven years. But when I did last see it I was quite impressed by it. I expected it to look dated, but I didn't think it did at all. It was actually set in the late '60s, we purposely didn't set it in the '70s because we didn't want it to be compared to the life of Slade - even though everybody thought it was based on our career. It wasn't really, it was based on an amalgamation of a lot of bands. Each scene in the film is actually a true story from different bands we knew or had heard stories about. In fact, I don't think there's anything fictional in it as such, it was just that the names were changed to protect the innocent. It was funny at the premiere, because all the business were sitting upstairs and all the fans were sitting downstairs and it was weird to see the different reactions. The fans were laughing in certain places and the business was laughing in totally opposite places, because the business people knew who the stories were really about".

Of course, although it's emphatically not a showpiece film for Slade, they feature a few times playing, with this one the most powerful, with Johnny Shannon and Alan Lake looking on, clearly less than impressed: 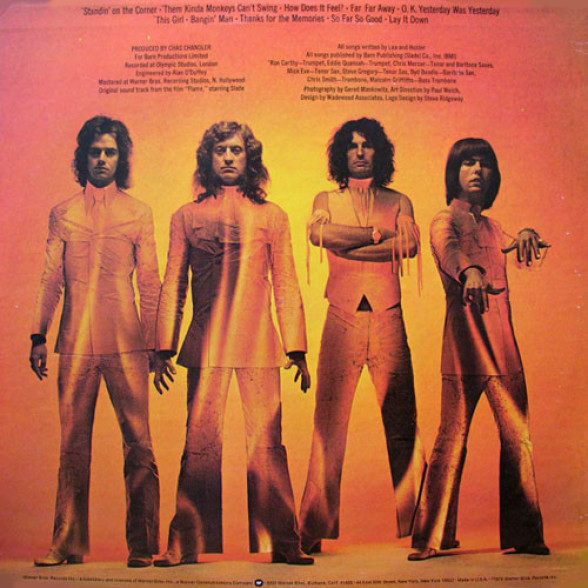 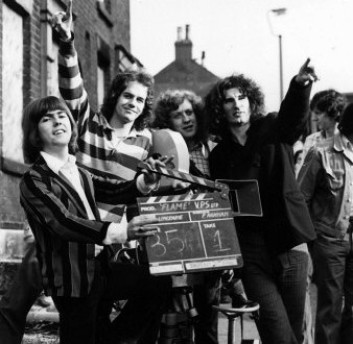 As mentioned by a few viewers, there are some problems with the film and it is by no means unflawed.  In contrast to other films such as A Hard Day's Night, for example, very little is revealed of the characters in the band (Dave Hill is little more than an extra, and even Noddy is fairly subdued and displays little of his natural exuberance).   Jim Lea as Paul, the disenchanted family man, and Don Powell as Charlie, the joker who is nevertheless trying to hang on to his roots, get more interesting roles, as is hinted at in this short scene where Charlie, meeting up with one his old workmates from the foundry, starts wondering if this is what he really wants:

One poster actually says the film stars Tom Conti and Alan Lake, with the four Slade band members only mentioned in smaller print below: 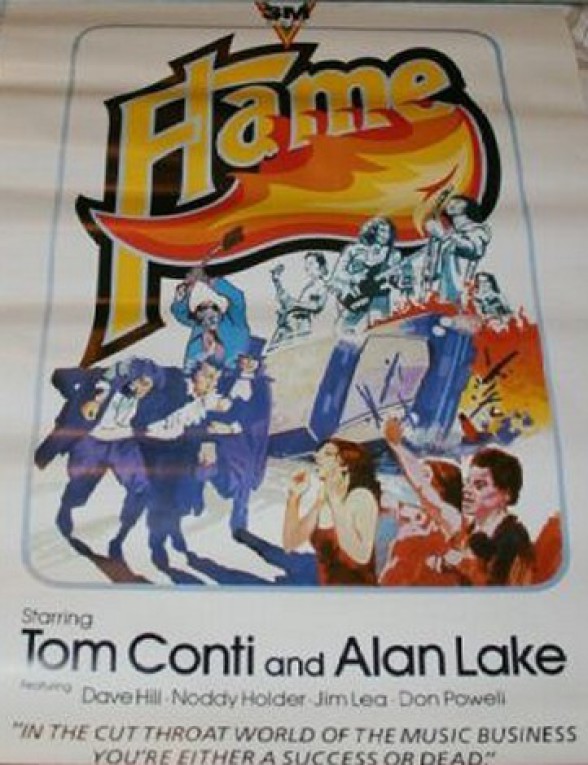 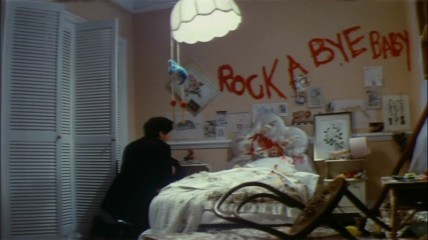 Seymour (Tom Conit) has the frighteners put on him

Another problem, again as mentioned by viewers of the Kermode film club, is that there is little sense from the script of why exactly the band splits apart, and there is little shape to the last third, given that a sub-plot, involving Harding trying to strong arm Seymour into giving up the band now that they're a success, takes prominence.  By the time Harding has forced Seymour to give up, the band have lost their momentum, Paul has walked out, and Stoker's final words to Harding, when told by the latter that Seymour has given up and had enough, are "I tell you what Ron - we've all had enough". 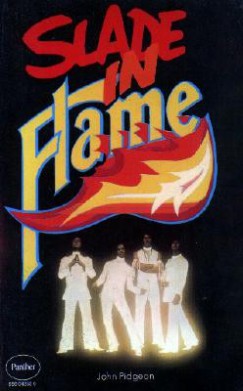 The ''Flame' novel by John Pidgeon

it was fascinating to read that the band now wish they had filmed the book of the film (by John Pidgeon) rather than the actual script, as it develops their characters more; I've just bought the book on abebooks.co.uk, so looking forward to reading that.

The film itself has been uploaded onto youtube by Roy Orbison, just type in 'Slade in Flame (1975) Full length movie'; there is also a fascinating and invaluable interview on there with Noddy Holder discussing the film, taken from the DVD release which has some great extras (DVD available for about £9).

I think you're really going to enjoy this one - and of course there are some great Slade songs, especially 'How does it feel?' which tops and tails the film, and is surely Slade's best track.

Thanks for kermoadeandmayo for uploading one of the clips featured on this page onto youtube.

The pic at the top shows Flame on their way to the pirate radio station for their ill-fated appearance on Tommy Vance's show.