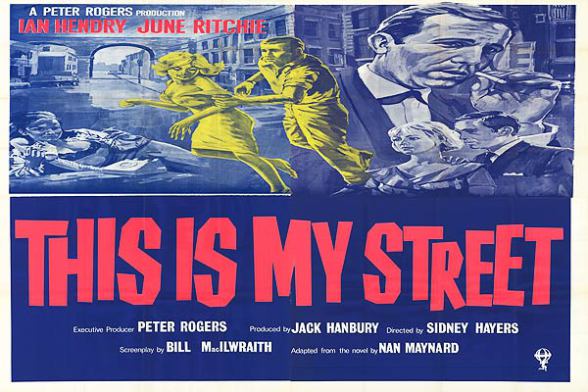 A year after Live Now Pay Later (written about elsewhere on this website, see here) the two stars of that film, Ian Hendry and June Ritchie, were reunited for this drama produced by Peter Rogers (of Carry On fame), directed by Sidney Payroll Hayers and with music by Eric Rogers, who scored the music for over 20 Carry On films, and indeed at one moment in the film you can hear a refrain which was then reused in at least one Carry On film.

This is my Street is more akin to the New Wave films of the period though, despite being set in Battersea in London, focusing as it does on people who feel trapped and are looking for ways of escaping.  The central character is Marge or Margery Graham (June Ritchie), married to Sid (Mike Pratt) with a four year old daughter Cindy, living in a narrow terraced house backing on to the railway next door to her widowed mother Lily (Avice Landone). 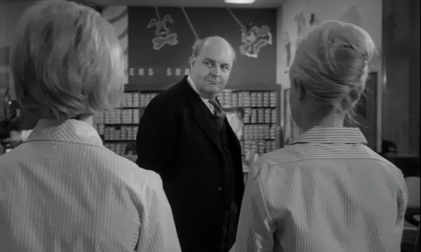 Marge works on the cosmetics counter at a local store, where she is happy enough apart from the unwelcome lecherous attentions of Mr Fingus (Derek Francis, left), who suggests that he can progress her career if they "discussed it over dinner".

Indeed the whole film is like a time capsule of antediluvian sexual and social mores, with Marge's husband demanding his dinner when he gets home, and Mr Fingus (or Mr Fingers, as I thought he was called at first) leching over her and her collegaues at work; but by far the most oppressive attentions come from Lily's lodger Harry (Ian Hendry), who basically badgers Marge non-stop, even though she has no interest in him and finds him tiresome.  Nowadays he'd be done for stalking and sexual harassment, and it would be hard to imagine her own mother acting as Harry's landlady, but times change.   However one day Cindy goes missing, and Harry seizes his opportunity to ingratiate himself with Marge by driving her around to look for the child: 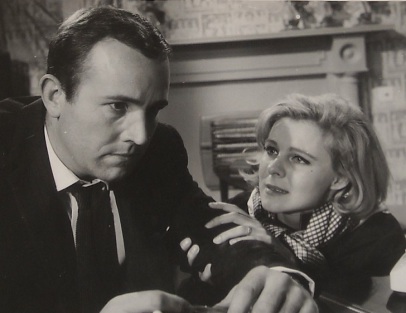 Having finally worn Marge down, the couple embark on an affair, and very soon Marge falls in love with Harry, although there is little evidence that her affection is returned in the same way and it soon become obvious that Harry is one of those people who always 'wants the one he can't have' and soon looks round for a new target to work his charms on.

In the meantime there is a sub-plot involving near-neighbour Maureen (Phillipa Gail), who knows she is attractive to men and takes care to flaunt it as much as possible.  She works at the local coffee bar (that mainstay location for films of the period) where she has little time for callow youth Charlie (the late John Hurt, in almost his first film role [he had previously appeared in The Wild and the Willing with Ian McShane, as well as a short film]).  In fact, I thought it would be nice to show this short clip, as Charlie tries in his hamfisted way to chat up Maureen, particularly as it features the aforementioned Carry On film music used in Carry On Loving some seven years later):

Whilst Maureen's mother (Madge Evans) seems to have an affair under her husband's (Merdith Edwards) very nose, her daughter seems to have learnt from her and has her eyes on Mark Clayton, a dentist, who can afford to keep her in the manner in which she intends to become accustomed to, leaving little opportunity for the Charlies of this world to attract her attention.  Maureen's story rans throughout the film, and those scenes are interspersed with the main story; the following clip is actually three different scenes placed together, as Maureen's constant need to provoke Clayton's jealous nature succeeds all too well (look out for a silent, brooding Patrick Cargill): 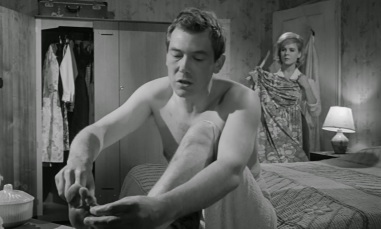 Meanwhile Madge's marriage with Sid is going badly (well, he does cut his toenails in the bedroom, so she does have reasoanble grounds for divorce) whilst her sister Ginny (Annette Andre), a teacher, arrives back home with her doctor fiance, Paul (Tom Adams).  Andre was an Australian actress, whose first UK film this was; she later teamed up with Mike Pratt of course as Mrs Hopkirk in 'Randall and Hopkirk (Deceased)' on TV in the 1970s.  Ginny looks similar to Marge, especially from the back, and Harry, who takes an instant dislike to Paul, takes delight in winding the latter up whilst flirting wth Ginny.  Things come to a head in this respect when Harry gives Marge and Sid, along with Ginny, a lift to the seaside, and as he leaves the couple who are staying in a B&B there, he tries his luck wtih Ginny on the way back: 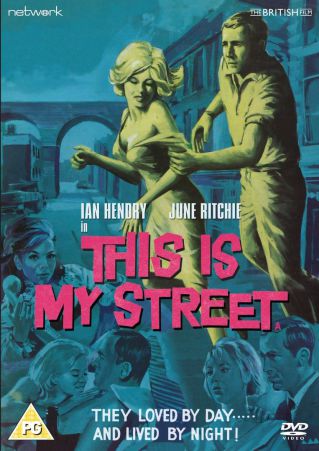 As the situation becomes more complex, the pressure takes its toll on Marge, and soon the situation becomes too much for her, with ramifications for all.  Although all seems to end happily, it is hard to forget Marge's comments that she can't stand Sid, and that she was desperate to escape, so it is difficult not to draw the conclusion that everything has just been papered over and it will all come apart again under the slightest strain.

Hard to get to see for some time, the DVD was released by Network on Air in March 2014 and can be bought for £7, although Network have a sale every six months or so when it can be bought for less than £5 (must just mention the tagline 'They loved by day...and lived by night!' which when you think about it is gloriously meaningless).

This seemed to be the last of Ritchie's quality films, along with A Kind of Loving, Live Now Pay Later and The World Ten Times Over; in fact wikipedia only lists one more film, The Syndicate, in 1968, and I don't know what happened to her, although she is still allive at the time of writing. The film itself seems to have fallen between the cracks in terms of its place in British film history, although it can now possibly be placed alongside films like Sparrows Can't Sing and A Place to Go, with its London setting  (many of the locations can be checked out as usual at the reelstreets website at http://www.reelstreets.com/index.php/component/films_online/?task=view&id=1018&film_ref=this_is_my_street&start=20) and its claustrophobic atmosphere.  Worth seeing for Hendry and Ritchie alone.

The pic at the top shows Ian Hendry and June Ritchie